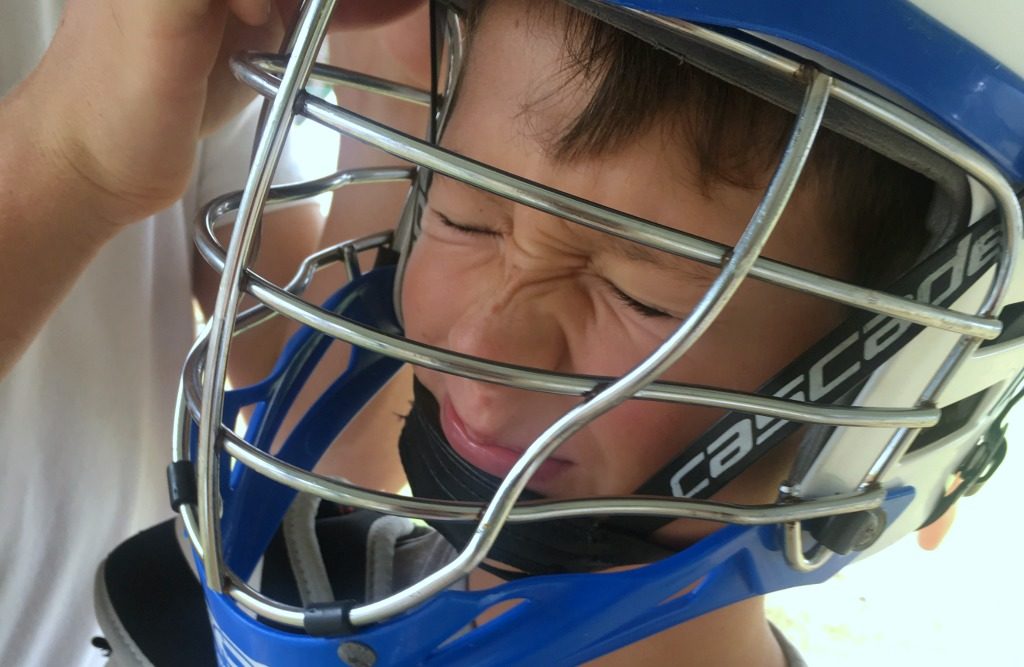 I signed my 9-year-old up for lacrosse camp this week with a handful of his best buddies. It was a free camp, put on by my friend’s high school son and his lacrosse teammates. My son loves anything involving sports – competition, tackling, jumping, throwing, catching, counting, dirt, balls and sticks. It was perfect … for both of us actually (free and local for me)! I thought my son would be ecstatic, so I was surprised the night before when I mentioned I’d be dropping him off in the morning and he started crying and begging me not to make him go.

“Do I push or pull? Force him to go? Or let him make his own choice?” I thought to myself before asking him a few questions that would help me decipher what was behind this unexpected panic.

If you are a parent, you’ve undoubtedly been in this situation before. Your kid desperately doesn’t want to do something. You know if they push outside their comfort zone they’ll have fun or a positive experience. You wonder whether you should force them to do it or give them the freedom and independence to decide for themselves. The right answer depends on the circumstances and the cause of your child’s fear.

In this case, my son wasn’t afraid to go to the camp because it was dangerous or he thought it would put him in harm’s way. He felt safe with the boys both coaching and playing and comfortable with the location. Instead, he was afraid because he didn’t know the rules of lacrosse. Afraid if he wasn’t good at it, he’d look foolish to his friends. Afraid the other boys would be better. Afraid he didn’t have the right equipment. Afraid of the unfamiliar and mostly afraid to fail.

A long list of imagined fears were floating around in his head convincing him he’d be better off staying at home than running around having fun with a group of boys he spends most waking minutes asking me to arrange play dates with.

“I understand how frightening it is to try new things,” I said, walking him through a logical conversation about the worst thing that could happen. “What if you are not the very best player?” I asked, offering that there would be other kids who hadn’t played and that 9 is actually a perfect age to learn a new sport.

“I know you are worried about not having your own equipment, but the boys holding the camp are bringing extra gear for you to borrow. They are excited to share with you,” I said.

Then we talked about the potential upside. “Maybe you will really like the sport,” I encouraged. “When the boys who play it talk about it at school, now you will be able to talk about it too. Plus, you get to spend the week hanging out with your friends and older boys you admire.”

After we had addressed each worry one by one, they weren’t as scary as he had built them up to be. We agreed he would go and try it for a day. If he didn’t like it, I wouldn’t force him to return. But my intuition told me once he got there, he’d want to go back.

At the end of the first day, he was waiting for me with a smile and a pile of borrowed gear stacked up on one of the instructor’s sticks. “Mom, I have to come for the whole week now because I need to take all of this stuff home and bring it back each day.” It was his way of saying he had loved his day at lacrosse camp without letting me say ‘I told you so.’

“OK,” I said in agreement. “Yes … because of the equipment, you are definitely going to have to come back then.”

For all of us, not just our kids, overcoming fear is a skill, and skills have to be learned and practiced in order for us to master them. The great thing about sports is the endless opportunities they provide for our kids to hone the skill of moving beyond something scary. After all, instilling confidence in our children and pushing them to take the right risks is what will get them to where they want to go (and where we want them to go), not in just sports, but in life.

That night when I was putting my son to bed I seized a teachable moment. “Look what happened to you today,” I said. “You were unsure and scared about trying something new that you didn’t know anything about and it turned out to be something you actually enjoyed.”

Then, before I let him fall asleep, I told him how proud I was he had the courage to try something that scared him. Knowing full well, what a hard thing that is to do … even for us grown ups.