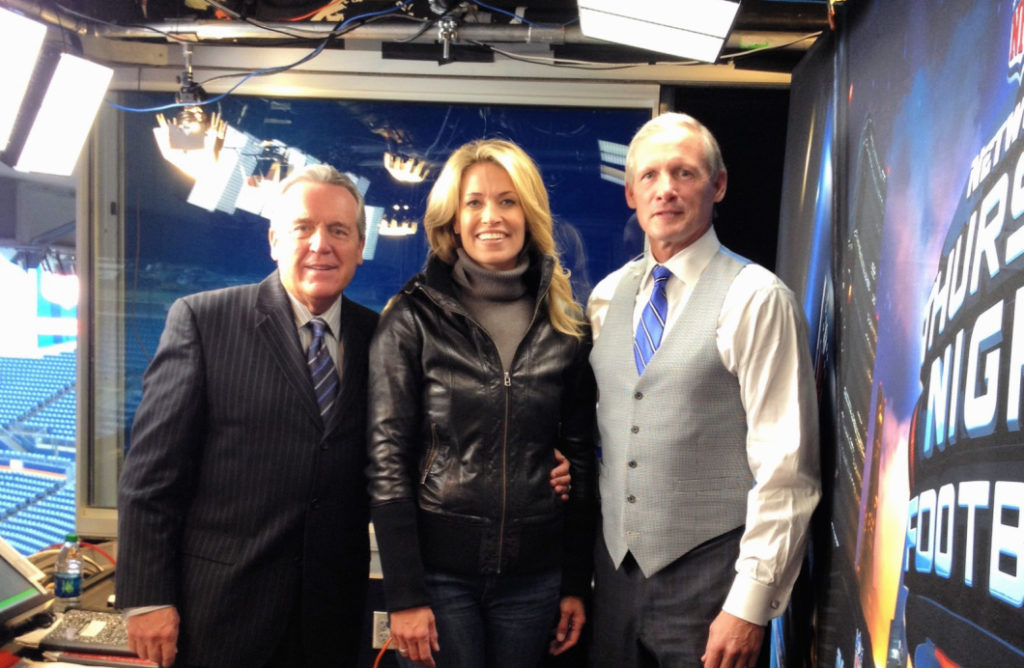 Me with my Thursday Night Football Broadcast Team, Brad Nessler and Mike Mayock.

Play-by-Play is one of the most prestigious jobs in sports broadcasting and often one of the most lucrative. The best in the business have an authentic voice and style that is identifiable the minute you hear them on the TV or radio. Think Brett Musberger or Jim Nantz.

Great game broadcasters excel at putting certain situations into perspective and building compelling storylines throughout a game or event so that the viewer becomes invested in the outcome and the players. Once a position almost exclusively held by men, more and more women are breaking into the space, but the top-tier jobs are still mostly made up of male voices.

Think of a play-by-play voice as the team’s quarterback, as the setter in volleyball, or the point guard on a basketball team. They are responsible for setting everything up. If they can’t get the ball efficiently down the court or into their teammate’s hands, then everything else breaks down. A play-by-play’s primary role is to document a game by guiding the audience in and out of traffic, weaving in-game action and storytelling while continually setting the scene. The position requires a multidimensional talent capable of multitasking.

Here are some of the essential qualities that make a play-by-play personality stand out.

What Makes A Good Play-By-Play Announcer?

1. KNOWLEDGE
Explaining something requires knowing it yourself. A deep understanding of the sport is step number one. In this role, it’s critical to know rules, names, history, pronunciations, coaches, roosters, and backstories. Mike Tirico is one of the best I’ve ever worked with at this. It’s like he has a library of every game he’s ever covered cataloged in his memory.

2. A GOOD VOICE
A good set of pipes is kind of a non-starter. I think of my former co-workers Tom Hammond and Brad Nessler and their special voices. The best play-by-play personalities have a voice with depth, but they also know how to control their sound. Big volume moments require control and clear enunciation, not screaming. Yelling and excitement aren’t great if listeners can’t understand what’s being said. Tone and texture also determine your sound. Whether it is raspy or smooth, the sound of someone’s voice determines things like their likeability, credibility, and trustworthiness. Inflection, pacing, and clarity can be learned, but if God gave you a Harsh, nasal-sounding voice, you might want to consider another role.

3. POWERFUL PIPES
Power in a voice conveys authority and credibility. Think about when you hear someone who is soft-spoken. The sound of their voice can make them seem meek. Remember, yelling isn’t the same thing as power. Power fills up a room. It is rich and dominant. The way to Elevate a key moment in a game isn’t always through a raised voice, but instead through the use of things like cadence, tone, and inflection.

4. PACING
The way you add color and excitement to our voice is through pacing and inflection. You can emphasize certain things or pause to create drama. A poorly paced play-by-play call can leave a viewer’s head spinning trying to figure out what happened. Tempo and enthusiasm are good. I really like Hannah Storm’s pacing when she calls a football game. Her voice is smooth and enjoyable to listen to. Alternatively, A rushed pace, if not done right, will make an audience feel anxious.

5. AWARENESS AND INSTINCT
It is way harder than most people realize to find the right words and appropriate tone to capture a moment and intricately communicate it to an audience. The best play-by-play personalities can spontaneously put a moment into perspective, decode a complicated rule or simplify any situation into a few sentences that a viewer can easily understand. These are skills that require deep awareness of the moment and an innate instinct about what’s coming next.

6. AN ENTERTAINER
Steve Levy is one of my favorites at this. I feel like I’m having a drink with him at the bar, watching a game. I have just as much fun listening to him call a game from home as I did when I worked with him as a sideline reporter. (minus the car rides crossing state borders with Rod Gilmore—that’s a little inside joke). Gus Johnson is also skilled at making a broadcast fun! Creative names and unique phrases are a few of the ways a play-by-play personality can transcend their unique energy through the screen. These personalities make creative calls and use clever or unexpected words to express an emotion or describe a moment.

7. VERSATILITY
The cream of the crop, the best of the best can do it all. Joe Buck is as good at calling baseball as he is at football. Kenny Albert calls all four major leagues, NHL, NBA, NFL, and MLB.

8. HUMILITY
As much as it’s about a great play-by-play personality, it’s not. The really good play-by-play announcers understand they are part of a team. They are the instrument through which the work of hundreds of people is delivered. They listen to and value the broadcast analyst and sideline reporters’ contributions. They know what questions to ask to bring out the best information and commentary that best serves the viewer. As a former sideline reporter, nothing bothers me more than a play-by-play personality who doesn’t engage with or pay off a sideline report.

9. WRITING SKILLS
My former colleague Tom Hammond was a master at choosing the right words. He knew exactly what to say to convey the emotion of a big moment. What he said felt spontaneous, but much of Hammond’s poignant commentary was not off the cuff. Tom was like a poet conveying the meaning of a big play with his choice of words that he had often thought about and prepared long before they happened. Capturing the attention of a viewer requires a compelling Storyteller. Al Michaels is one of the best at telling a story throughout a game in a way that builds suspense and drama so that when the big moments happen the viewer is vested in the outcome.

10. MULTI-TASKER
Doing play-by-play is like being a traffic cop. Knowing who and what goes when is an essential part of the job. Starting a broadcast by reading an open, introducing the event and the lineups, tossing to the sideline reporter, identifying coaches by name or signals made by officials, throwing to a package or piece of video, going to commercial break, reading sponsor promotions and other important ads are all part of the play by play’s job. Oh, and meanwhile, there is a game going on too!

3 THINGS TO HELP YOU GET A JOB IN SPORTS BROADCASTING