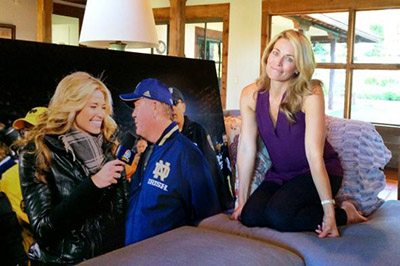 When Notre Dame opens the season against Rice today in South Bend I won’t be on the sidelines. Instead, for the first time in seven years, I’ll be watching the Irish from my couch.  For old time’s sake, I might prop up the life size souvenir photo (above) that Brian Kelly so kindly sent to me recently and interview it at halftime. I won’t have to carefully consider the wording or content of my questions. For that matter, I can do it drinking coffee or better yet, a bloody Mary and in my pajamas!

Former Nose Tackle Louis Nix jokingly accused me the other day of dumping the Irish by leaving my job as NBC’s sideline reporter.  Truth be told, I had hoped to at least stay long enough so when my kids started applying to college seven years down the road, I’d have a few good connections in South Bend. 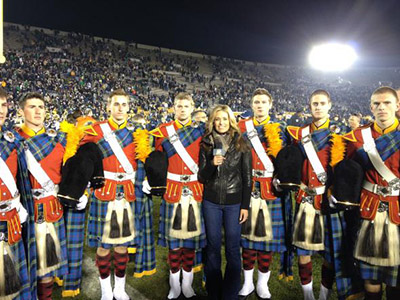 It didn’t work out that way. Not by my choice, but that’s okay.  Because, for the past seven years, I got to be part of an amazing community and be around an excellent football program.  As I reflect on the time I spent at Notre Dame, I realize it is the people I’ll remember most.

I’ll miss the ushers asking me about my son, Declan, who was plump inside my belly when I first got the job in 2007. Former Head Coach Charlie Weis taught me that year to always stand behind the line of scrimmage so that I wouldn’t get hit. 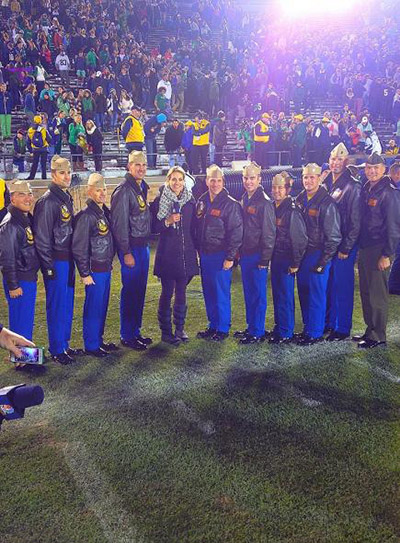 I’ll miss getting to know young men who are just scratching their potential and the parents who have worked so diligently and sacrificed so much to get them to a prestigious University like Notre Dame.  Seeing Wanna Lewis’ tears of joy when she spoke to me about her son, Kapron Lewis Moore, graduating from college taught me things about myself as mother that will stay with me until my own son graduates one day.

I’ll miss the countless people that asked me to snap a photo with their son or daughter, father or friend and then thanked me profusely as if I had just done them some huge favor.

I’ll miss visiting with the Blue Angels pilots after they nailed a Flyover and talking shop with people like Director of Strength and conditioning Paul Longo on the field hours before game time about who’s lifting how much.

I’ll miss my good friend, NBC Analyst Mike Mayock and our non-stop arguments/discussions about football during our drives from Chicago to South Bend and back.   As if I had any business challenging Mayock on the subject of football! No one has taught me more about the game and what it’s like to have a passion for the game, than Mike. 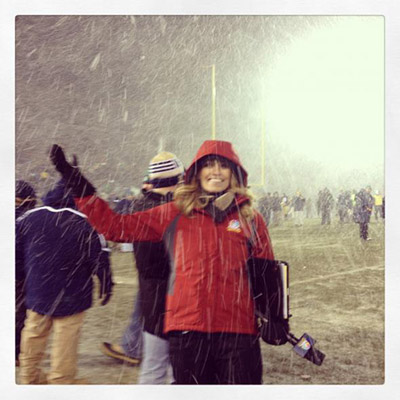 I’ll miss prodding Brian Kelly and all of his staff for information, the part of the reporting job I have always loved the most.   BK was professional, shot me straight and respected me enough to challenging me and sometimes, even push back.

There is a good chance I’ll be asking his cardboard likeness some tough questions today from my couch. You just won’t get to hear them.

Good luck Irish and thank you, to so many people, for your many years of kindness.