Young women ask me often for advice on how to find a job in sports media. The sideline job that I do gets a lot of exposure, but there are so many other opportunities to explore. I’ve met many talented kick-butt women in my industry. I’ve asked a number of them to share their stories. I hope it will help educate younger generations of women about the variety of career opportunities in sports media and how to pursue them.

Kym Fortino’s is one of the few female NFL photographers. I met her many years ago on the 49ers sidelines and asked her to share her inspiring story.  Here it is. 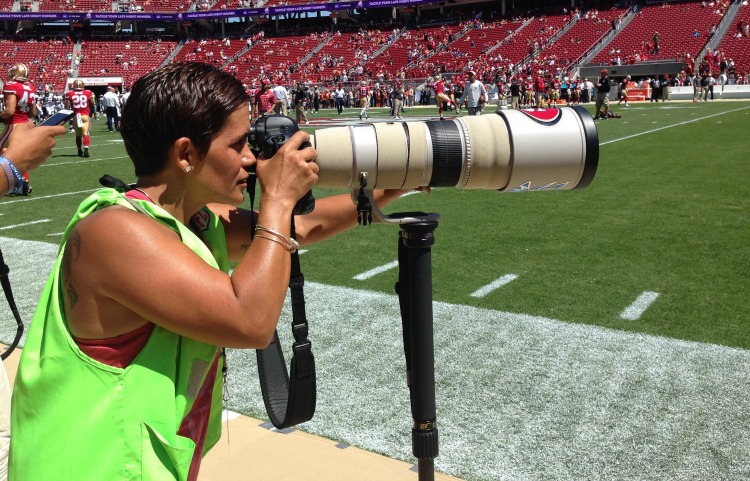 “Your camera is almost bigger than you.” It has to be the most repeated comment I’ve heard on the sidelines. If I had a dollar for every time someone said it I would be, well, you know, Cam Newton rich!

Instead, I stand tall among giants. 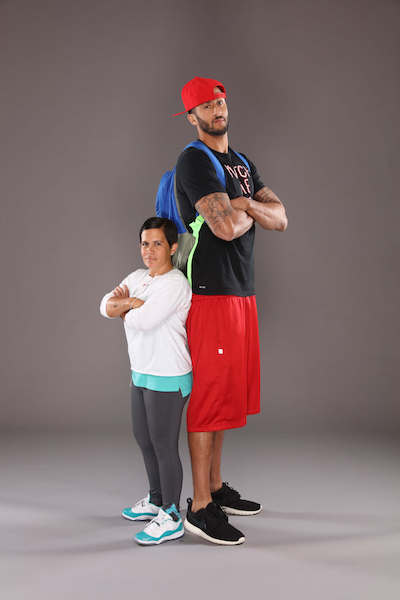 I am a woman and I am a photographer in professional sports.

Specifically, I am one of the team photographers for the San Francisco 49ers. It’s an amazing job, but it didn’t come without challenges, hard work and tenacity.

Although I dabbled in photography as a kid, and always seemed to have a camera in my hand, my love of photography actually is derived from my love of sports, emotions and moments.

How do you relive those special moments over and over again? Through still photography.

I think I made the connection playing soccer at an early age. Having been a part of so many league and state championships, youth Olympic gold, and an array off moments captured and frozen in time forever, through photography.

My journey to the NFL sidelines is rather unorthodox.

I didn’t go to an Art School or even major in Photography. It’s cliché, but my path was led by passion.

I was already working in the corporate world, when my kids began playing competitive sports and I decided to pick up a camera again. The digital era had just begun, and the fire was lit. Digital cameras were similar to film, as far as the base functions I knew previously, but different enough that I had to learn all the nuances that came with a new way to capture these moments. I would shoot a ton of pictures over the weekend and bring them into work to show my coworker, George, who was a freelance photographer on the side. It was George, who said, “You know, you really have something here. I like your eye”. That was all the co-signing I needed. I continued to shoot everything I could. That led to more opportunities from youth Pop Warner Football, to High School and covering sports for the local community newspaper.

By pure coincidence, I met Terrell Lloyd, the longtime Photographer for the 49ers, in a local camera store. We chatted about sports and photography, exchanged information and eventually I was able to attend an off-season seminar to hear him speak.

I remember watching Terrell’s presentation, thinking to myself, “How can I take his experiences and opportunities and make some of my own?”

I eventually asked the photo editor of the local newspaper if he would apply for credentials for me from the 49ers. The request was approved and I found myself on the sidelines for the first time.

For the next two years I watched Terrell work, learning from the best. I assisted him in other off-the-field areas, and accepted any opportunity he presented, as I knew it was a chance for me to grow and hone my skills.

In 2009, a spot opened up in Terrell’s crew and he asked if I would be interested. Without hesitation, I was all in!

After assisting Terrell for many seasons, this past year, 2014, became my first official season as a 49ers team photographer.

Sure, shooting on sidelines for an NFL franchise is a lot of fun. But it’s also a lot of work.

The sidelines are cascaded by shoulder pads, male-dominated media and sparsely lined female photographers holding cameras as big as the guys standing next to us. I welcome the challenge, posturing myself for prime real estate as my team nears the red zone and remain confident that if the play comes my way, I am ready! There are many dynamics that go into getting ‘that shot’. Angles, shadows, sun, exposure, shutter speed, location on the field and perhaps the most important, understanding the game enough to have a feel for the flow and where the play can eventually end up. I try to learn players’ tendencies, in an effort to make accurate assumptions on whether it’s a deep pass, or a run. Immediately after big plays, I continue to shoot. I’m looking for that raw emotion from playmakers, celebrations, coach’s reactions and then swinging the camera around to the fans cheering!

Being a part of an organization like the 49ers is sort of like a marriage. For better or for worse. 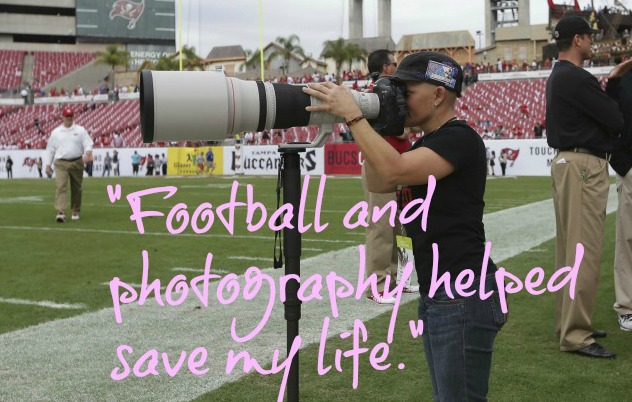 As a team, we have had our ups and downs. It’s my job to remain constant, and committed. In late July of 2013 I was diagnosed with breast cancer. Just a few short weeks from the start the season. What I thought would derail my football season, ended up breathing life into me. The owners, coaches, players and staff rallied around me and kept me lifted on game days. In fact, it was that support and energy that gave me the strength I needed during my treatment. With my chemo sessions scheduled on Monday, I was able to continue to work and shoot on Sunday, which was my lifeline…where I felt alive.

I didn’t miss one game.

All of these people I spent countless hours with became my football family. In essence, football and photography helped save my life.

I am heading into my 7th season and I’m still in awe every time I step out onto field on game day.

The thrill is never gone.