It’s not that the former quarterback doesn’t love sports; he just knows that the chances of your child becoming a pro-athlete or even a collegiate athlete aren’t in your favor. So why make summer so serious?

When McCoy was a kid growing up in Northern California, he was obsessed with athletics. In August he’d sweat through double-day Pop Warner football practices. When the football season ended he’d jump right into basketball and after that, Little League. But come June and July, he was done. No travel team baseball, summer basketball leagues, swim meets or soccer tournaments. It’s was time for fun and family trips.

These days, for many families, the summer vacations are their children’s sporting events. Parents dedicate themselves, year round, to sacrificing weekends to youth sporting events as their children specialize in specific sports, sometimes before their tenth birthdays. McCoy doesn’t get it.

“Let the kids do what they want for as long as they can. I have a hard time seeing kids play only one sport,” says the 43-year-old father of two who doesn’t believe kids should specialize in a single sport until at least high school. His teenage daughter Liv is on a competitive cheer team. His son Luke, loves both basketball and football. 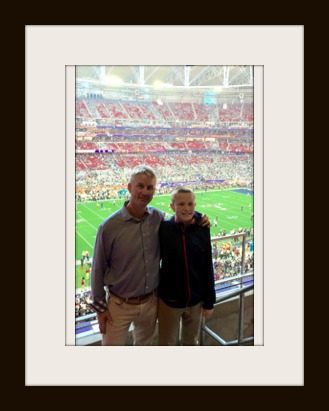 McCoy and his son, Luke.

“There are certain skills you develop in different sports. The hand-eye coordination you learn in one sport versus the other, the physical part of the game in other sports, they are all different.” And important, says McCoy. Just look at how many professional athletes played multiple sports in high school. “Very rarely have I heard at the combine, when I talk to players, ‘I’ve only played football,’” says McCoy. Case in point, the Chargers first round draft pick in 2015, running back Melvin Gordon, was a football standout at his Wisconsin high school. He was also one of the state’s best long jumpers.

“Parents ask me all the time, ‘this coach only wants my kid to play whatever sport it is, they don’t want him to play the other sports and if he does, it’s going to hurt his chances,’” says McCoy. “My response to that, if that were my son, is ‘okay, my son is not going to play for you.’”

If your youth coach is giving you a hard time for missing practice or a game in favor of a family vacation, you might feel less pressure if you knew what Mike McCoy knows about young athletes. “If you are good enough, they are going to find you,” advises McCoy. His message for the adults in charge? “Whenever a coach asks me for coaching advice, I always say, ‘all I want is for my kids to come home tonight and say I want to go back tomorrow.’”

After all, sports should be fun. And so should summer!