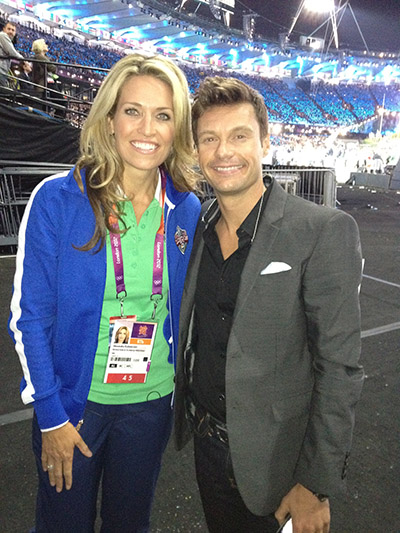 Paul McCartney was still singing hey jude when I got the go ahead to storm the field.  Along with Michelle Tafoya and Ryan Seacrest, my NBC assignment for the night was to interview American athletes after they had marched around the track in the 2012 Olympics opening ceremony.  Flag bearer and fencing champion Mariel Zagunis was my main target.  But first I had to find her!

As soon as Ryan, Michelle and I got the green light we stepped into the middle of the field and were suddenly swimming up stream in a sea of thousands of athletes.  I always ask people what they will remember about an event or game 10, 20 years from now.  What will stick with me is the feel of the residue from at least 1000 fireworks falling into my eyes, the rush of being smack dab in the middle of the field as if I were an Olympian in these games and the expressions of the Uzbekistan, Korean, Mexican or actually every athlete when they realized the guy pushing to get by them was Ryan, that guy from American idol!